Leap of Faith – The War on Iraq

While visiting my family in North Carolina in July of this year I ran out of reading material and found a small bookstore, The Country Bookshop, in downtown Southern Pines, located on 140 NW Broad St if you ever find yourself close by. There is really only one main street in the town, so you can’t miss it. My home town, Aberdeen, is even smaller and doesn’t have a bookstore.

To my great surprise, they had a relatively large section for history books, perhaps 4-6 shelf meters. There I found a new book (Leap of Faith – Hubris, Negligence, and America’s Greatest Foreign Policy Tragedy), published in March 2019, and found it of interest as I’ve already read perhaps far too many books about American involvement in the Middle East and still can’t really understand how we screwed up so badly, to put it mildly. 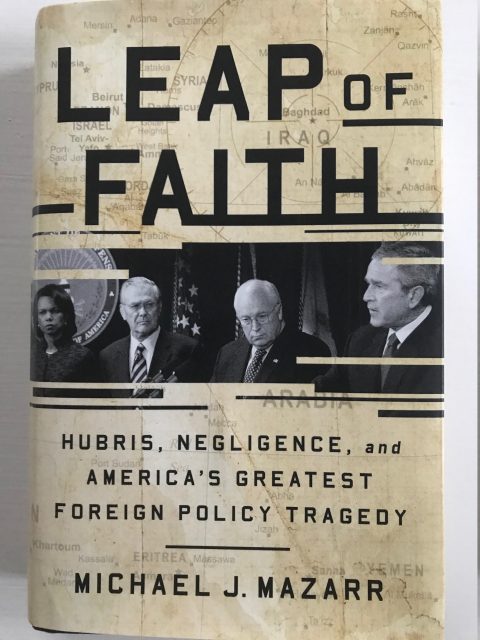 As a child, growing up in North Carolina, I had assumed that we had the best possible leaders for our country and that they were both knowledgeable and talented individuals with high moral values. As I grew older I realized that the American historian Barbara Tuchman was probably right when she said in one of her books that we seem doomed to always choose the worst possible leaders of our countries. She was talking about the countries participating in the negotiations at Versailles in 1919 to establish the Peace Treaty to end WWI. Their thirst for vengeance created the soil in which the Nazis could grow to threaten world peace. Today’s leaders haven’t improved much. This morning I read in the on-line version of the Guardian about Boris victory in the UK elections, paving the way for Brexit on 31 January 2020. Our President in the US is busy getting impeached and Putin in Russia is busy trying to influence elections in many countries, not just in the US.

Before I bought the book I checked to see who wrote it. Michael J Mazarr is a senior political scientist at the RAND Corporation and has previously served as the associate dean and professor of national security strategy at the US National War College in Washington, DC. With 95 pages of notes and bibliography it can be said to be well-researched. He had over 100 interviews with the decision makers of that time and ploughed his way through numerous memoirs written by government officials that were active then. Perhaps most importantly, he accessed every declassified document available, from both the US and British governments. As Mazarr was an employee of the Department of Defense (DoD) during part of his time working on the book, he submitted the draft manuscript for security clearance and was cleared by the DoD for publication.

So, what does he have to say in 500 pages? The short version is that we screwed up big time and that we risk doing it again and again in the future. 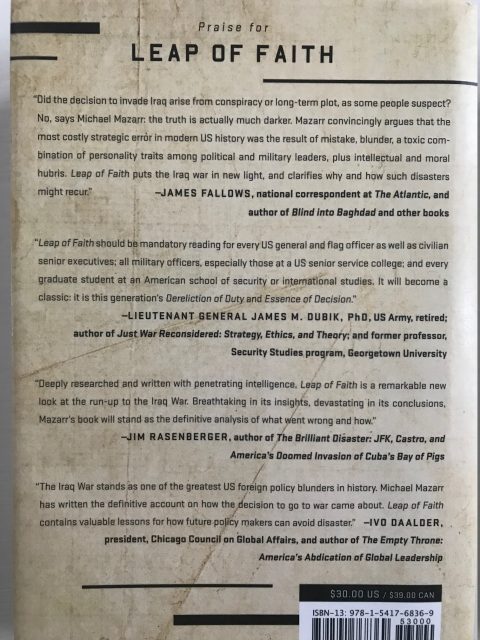 President George W. Bush was a born-again Christian that truly believed that he was on a mission from God. Before 9/11 senior government officials were already convinced that sooner or later Saddam had to go. The events of 9/11 functioned as a turning point or catalyst pushing the administration forward towards what was already seen as an inevitable war with Iraq.

After the end of the Cold War in 1989-91, the consensus of opinion within the US national security community was one of messianic purpose. God had made the US the chosen one, we were bringing civilization to the barbarians. If you were not for us, you were against God, and you would regret being on the wrong side of history.

Our American leadership actually thought that the Iraqi people would be so pleased by the arrival of American troops that they would welcome us as saviors, in much the way of the French when we marched into Paris after the D-Day invasion. They planned accordingly.

No plans were made for administrating a defeated Iraq, as it was assumed that our friends in Iraq would create a new pro-American government and take care of their country themselves. When that didn’t happen we had no plans for solving the chaos that followed. To make matters (far) worse, one of our first acts as an occupation force was to dissolve the Iraqi military and send them home to unemployment and frustration. We also blacklisted all Baath-Party members from participation in government and from holding positions of responsibility – effectively ostracizing the vast majority of educated and qualified Iraqis. Arms and ammunition dumps were left unguarded and frustrated Iraqis could collect the arms and ammunition needed to fight the foreign occupiers.

The US did not set aside any funds at all for civilian law enforcement and/or reformation after a victory in the war was won. We just assumed that the Iraqi police and courts would continue with business as usual. Unfortunately, their business, as usual, was administrating law and order in a single-party dictatorship, aided by 5 different secret police agencies that all used rape and torture as part of their SOP (Standard Operating Procedure). The police went home, taking their weapons with them. In many cases they joined the armed fight against foreign occupation.

Those within the US government that saw these problems did nothing to prevent them. Their usual excuse being that they assumed that the leadership knew what it was doing. Those that voiced a conflicting opinion were quickly silenced by a compact majority that “knew” we were doing the right thing. To criticize was seen as disloyal conduct in a time of national crisis.

Mazarr warns us that “It is the marriage of these two factors – the driving engine of the messianic sensibility in US foreign policy and the emergence of a specific moralistic urge to act in service of sacred values – that so often produces disasters.” (page 411)

He fears we will see more of the same in the future. I really wish I could say that he must be wrong about this, but I can’t.