All history teachers must have long lists of historical distortions on the part of students and fellow staff members, not to mention the “general public”.

As an American I keep hearing Europeans say that there are 52 States in the USA, and I’ve always wondered how they could possibly think so. There are only 50. If you doubt me, just count the stars on the American flag, there is one for every State.

Another (very) popular misconception has been related to the American Civil War. It is common in Europe, and even in parts of the USA, to maintain that the Civil War (1861-65) was fought to bring an end to the evils of slavery. 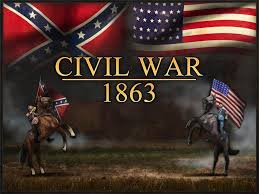 That slavery was an evil is beyond any doubt, however it was not the reason for the Civil War!

The short version is as follows, according to me at least:

The South was populated by plantation farmers and small farmers. The majority of all farmers had no slaves at all. A small minority of farmers had large farms with imported slave labor. Cotton was the main cash crop. Cotton was produced and shipped by boat to England where it was sold for use in the British textile industry. Money from the sales was used to buy manufactured goods (such as guns, boots, horse saddles, window panes and much else), and these goods were then sent back to the South for sale.

The prices were lower than for similar products produced in the industrialized North, due to economies of scale. A factory in England that makes 5,000 guns a year can price each gun lower than a factory in the North that only makes 100 guns per year.

The North was not suitable for extensive agriculture and was therefore settled by artisans, shopkeepers, and tradesmen of various kinds. Surplus population crossed the mountains and went on into the open plains areas in search of land to cultivate.

The small industrial enterprises in the North were very angry about the “unfair competition” created by the cheap imports from England, and demanded of their elected representatives that import taxes should be imposed so as to bring the price of the imports up to and hopefully above the prices they themselves were asking for their products.

The South found no reason to pay higher prices for industrial products and demanded of their elected representatives that no such import taxes be levied.

In the Constitution of the United States it very clearly says that the participant States have joined freely, implying that they are free to leave whenever they choose.

When South Carolina chose to leave, and together with a total of 13 States chose to create a new country, “The Confederate States of America“, President Lincoln refused to accept it.

Legal historians are in agreement about Lincoln being in breech of the Constitution when he refused to allow the States in question to leave the USA.

In any case, Northern troops were “occupying” part of the State of South Carolina, an island off the coast of Charleston named Fort Sumter.

When the North refused to withdraw their troops the South attacked and threw them out. The Civil War had begun.

On 1 January 1863, after the North had lost numerous battles against the Southern forces, the Emancipation Proclamation was issued by President Lincoln, freeing all slaves in the States in revolt. States that were not in revolt, such as Maryland, West Virginia and others, were allowed to keep their slaves.

The idea behind the freeing of slaves in the South was to encourage slave revolts behind enemy lines. It didn’t happen.

After the Civil War was over all slaves were freed in the entire USA, which was of course a good thing.

Between 1865 and 1877 the North occupied the South with military force. When they withdrew in 1877 they turned the political power over to the same people that they had fought against during the Civil War.

There is so much more to relate, however I promised the Short Version.